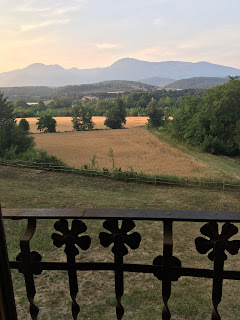 It has been twelve crazy days since we arrived at the Mas Costa house. The first few days were spent walking around in circles taking in the beauty and making lists of all the immediate tasks. In the ensuing week we have managed to register with the town hall, fill our nearly empty fuel tank for hot water/heat, purchase a vehicle, insurance, transfer the utilities, and Internet, and meet with the US consulate in Barcelona to complete a form to release our belongings once they arrive in port.
We have also been meeting a lot of our neighbors. Once word got out in the village, people have been coming by to check us out. The other night we were awakened by crashing and thumping to find a neighbors donkeys had escaped and were under our house eating. The next morning we set about to find the owners. After a few calls, David came with his five year old daughter and we managed to separate the donkeys from our own donkeys, harness and get them tied to the bumper of his car while Frida played with the daughter. Our own donkeys, Montserratina and Dali, are finding their way into our hearts. Each time we come home they are waiting near the gate.The house is completely beautiful and overwhelming. There is so much work to be done. The first days all we did was explore and try to find our way back. Now we are meeting with plumbers and architects to try to untangle the web of pipes and wires that disappear into into the masonry. Just getting a count of all the light bulbs we need for a fourteen thousand square foot house can be daunting. Slowly we are making lists of which apartments and rooms to begin renovating, which rooms need beds, lamps, windows repaired, showers tiled, floors repaired, paint, shelves and so on.The flower and vegetables gardens are also a large project. We have begun pruning vines and turning over the soil. Even though it's late in the year we have started kale, chard and beets. Frida has picked out flowers for the courtyard and we have started a herb garden with sage, lavender rosemary and thyme. Our mornings have been spectacular. Sometimes as it is getting light outside the sound of hundreds of different birds begin their songs. On several occasions I have awakened to a roaring sound and looked outside to see a group of hot air balloons passing by in the early light. Sitting outside on the patio having coffee I can imagine all the scores of people that have lived here and looked out on this forest for the last four hundred years.We have two neighbors that rent one of the apartments and have their own vegetables growing. Often there are squash and cucumbers left in front of our door when we get home. They have been taking Frida on walks in the evenings along with their little dog Ulsa. Ester, the woman has been teaching Catalan to Frida. Overall they have been an enormous help as they have lived in the house for the past two years and know a lot about its workings.The kitchen downstairs also has much to do. The wood oven is in need of serious repair with the dome literally worn out. The smell in the oven room is still strong with burnt oak.  It has been really difficult to find someone knowledgeable to work on it. I don't think there are as many people using them here as there are in France. On the bright side, one of our neighbors is a Dutch cabinetmaker. I'm hoping he will help build some large tables and a long counter. As it looks now, we should be able to accommodate guests within the next couple weeks. Some rooms and one apartment will be ready, and I think the rest will follow. Anyone interested in coming to help work on the house or garden would be welcomed with a free, place to stay and meals. 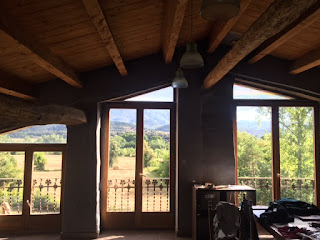 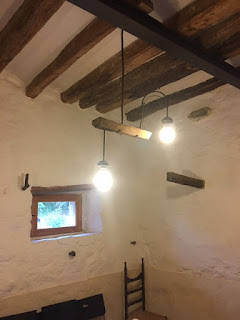